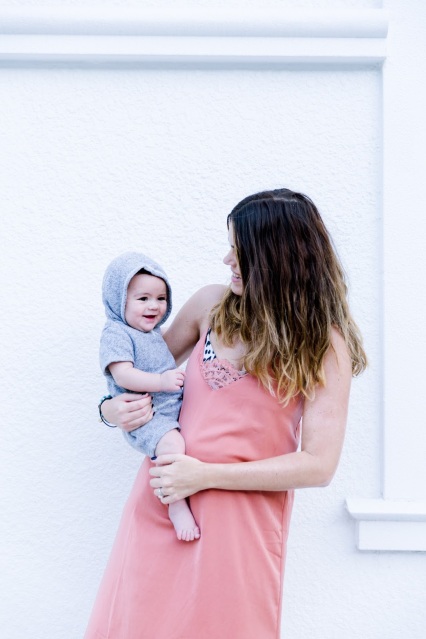 It’s not lost on me that many women struggle to get pregnant. It’s something, that for the most part, is out of our biological control; and yet, many women feel at fault when they have a hard time conceiving or when they suffer some sort of miscarriage along the way.
I was very fortunate that I got pregnant rather quickly. Both Maya and Rocco were conceived on the first try, much to the dismay of my husband, who was so looking forward to months of endless sex (poor guy). I never took that fact for granted. I personally know many women who have struggled or currently struggle to have a child and my heart breaks for them. I can only imagine how many tears, how much heartbreak, or how many ‘why me?’ questions, they suffer through when things don’t go according to plan. And yet, many of them never give up, never lose hope, never stop trying. That’s admirable and brave.
You never think about it, really, until it happens to you. And it did. I had an ectopic pregnancy in May of 2014 and it broke me. It was unexpected, and a fluke, we came to learn, which made it tougher to swallow since there was no rhyme or reason as to why it happened. We were ecstatic to find out that we were pregnant with our second. Growing our brood was always the plan and now that dream was becoming a reality. Coco was over the moon, yet simultaneously bummed, because again, pregnant on the first try meant no more sexy time trying to make a baby! I was immediately tired, slightly nauseous, and moody. I peed on the stick and did the blood work (the numbers kept going up). I was very much pregnant and I was thrilled. We shared the news immediately with a very small number of family members.
Shortly thereafter, I started spotting. Now, spotting is pretty normal when you’re pregnant, only I never spotted with Maya so I was a bit concerned. I called the doc, she reassured me it was perfectly normal, but if it didn’t stop, to call her. Not only did it stop, when I went for the next round of blood work, my numbers went up again. I was scheduled for my first trans vaginal ultrasound. I was 5.5 weeks and we were hoping to hear the heartbeat, or if not, at least see it. They saw a sac, but no heartbeat yet. It wasn’t much to worry about, I was told. It was still early so they scheduled an appointment for the following week. A few days after that, we left to LA for one of my dear friend’s wedding. We couldn’t wait to share the news with them. There was much to celebrate! This pregnancy was already exhausting me, but that didn’t stop me from dancing all night long and having a good ol’ time! I had nothing to worry about.
The next morning, I started spotting again. I freaked out. What if I overdid it at the wedding? What if I danced too much or too hard? What if I carried Maya for too long? I made myself nuts with countless ‘what ifs.’ I called the doctor and she said she would schedule an ultrasound on an earlier date just to check things out. I knew that something wasn’t right. I know my body and something was off. I told Coco I wanted to come home a day early so I could get this ultrasound done. I was a nervous wreck. 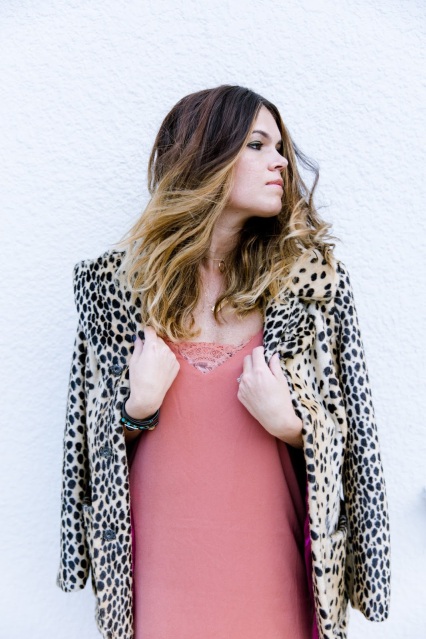 The night before my ultrasound, I couldn’t sleep. I was still lightly spotting and I couldn’t stop my racing mind. Patience is not my strongest virtue, and my anxiety levels were through the roof. The morning of that appointment, I showed up 45 minutes early and waited. Those were the longest 45 minutes I could remember and sitting through that silent ultrasound was even worse. You are so exposed emotionally and you are just lying there hoping for some information but instead, hearing nothing because the technicians aren’t allowed to give you any results. It was excruciating. I kept asking, “can you see anything?” “can you hear anything?” and all she kept saying was, “you’re still very early,” and that the doctor would be in to talk to me after the exam.
It was back to the waiting room- and then- a call. It was my OBGYN’s office. The doctor on site had called to give my doctor the results. I was having an ectopic pregnancy. An ectopic what? I had heard about ectopic pregnancies but never really thought about it, because why would I? I never had an issue getting pregnant so why this now? An ectopic pregnancy is a complication of pregnancy in which the embryo attaches outside the uterus (https://en.wikipedia.org/wiki/Ectopic_pregnancy). Basically it’s not a viable pregnancy and considered extremely dangerous (sometimes deadly) because it can cause your tubes to  rupture. It can also lead to infertility. I was numb. I called Coco to meet me at the OBGYN’s office so we could plan out the next steps. Unlike miscarriages, ectopic pregnancies have to be terminated right away to avoid any complications and/or death.
The car ride was a blur. I felt so shitty. I felt like there was something wrong with me. As I sat there in my doctor’s office, waiting for her to come in, I started crying. I felt terrible and alone and even though Coco was there with me, it just sucked. I felt pregnant. I was starting to get attached. I had told everyone and now- this. Miscarriages are so common in women. According to the American Pregnancy Association, 10-25% of all pregnancies end in miscarriages (http://americanpregnancy.org/pregnancy-complications/miscarriage/). One in 50 of those pregnancies are ectopic. Chances are, someone you know has had either a miscarriage or an ectopic pregnancy. It’s that common. Yet, women feel the need to keep quiet about it and find it difficult to share. There’s shame and humiliation attached to it. But why? It isn’t our fault this happened. If we all talked about it to one another, there would be so much more acceptance, support, and healthy encouragement amongst women. We don’t have to go through it alone. There’s nothing wrong with you! It doesn’t make you any less of a women or any less of a mother for going through these unfortunate situations.
I didn’t have any of the risk factors associated with an ectopic, which made it frustrating.  Ectopic pregnancies are treated two ways- one is surgery, the other is using a drug called, methotraxate, which is used to treat cancer patients. The injection is administered by a gynecological oncologist. After my visit to the OB, she sent me right away to see the gynecological oncologist for the shot. The hope was that I would only need one shot to terminate the ectopic pregnancy. I would have to do blood work every 2-3 days to make sure my HCG numbers went back to zero. Sometimes it takes two rounds of methotraxate, but thankfully, I only had to go through one. The aftermath felt like a very bad, and heavy period. I had cramps and some pain, but it was bearable. I rested for the first few days and took it easy. I was down in the dumps for the first day or two, but hanging out with Coco and Maya, and catching a flick with my best friend, cheered me up tremendously.
I had to wait three to four months before trying again, and before trying, I had to make sure my fallopian tubes were in good shape. I went in for what’s called a Hysterosalpingogram (HSG test http://www.webmd.com/infertility-and-reproduction/guide/hysterosalpingogram-21590). In layman’s term, a tube is inserted through the vagina and into the uterus. A dye is injected and will flow into the tubes. From there, a doctor will check for blockage of any kind and see what’s going on inside the tubes to better determine what caused the ectopic pregnancy. It’s also done to determine a women’s fertility. I had no blockage whatsoever, and thankfully, two healthy tubes. There was no damage. The ectopic was a rare occurrence, in my case. For once, my neurosis and anxiety saved my life. Spotting is one of the earliest indicators of an ectopic. If I would have ignored it, my outcome would have been very different and much worse.
The good news was that even after having an ectopic, my likelihood of getting pregnant again was still high. Yes, my chances of having another ectopic pregnancy also went up, but I much rather focus on the positive. My wonderful doctor, Dr. Roselyn Bonilla, and Coco were immensely supportive and I was so happy to have received positive results. More importantly though, when I started talking to other women about what had happened to me, I was shocked to learn how many had either had ectopic pregnancies or miscarriages themselves. We shared the same emotional storyline of frustration, sadness, humiliation, and defeat. But we also shared the same story of hope, of encouragement, of love, and of resilience. I realized that having an ectopic pregnancy didn’t make me different or make me a failure, it made me just like everybody else. And there was nothing to be ashamed of!

On Janaury 2015, I found out I was expecting! We welcomed a happy and healthy baby boy on September 9th. Of course, I was excited and terrified when we learned we were pregnant. I wasn’t so quick to share the news this time around. I waited. Every first trimester appointment came with some nerves and trepidation, and when we heard that heartbeat, it was the most beautiful sound in the world. Once I was out of the first trimester,  we told the world! Sometimes, at the very moment we are navigating choppy waters, we have no idea why these things are happening in our life. I’m a firm believer that everything happens for a reason, even if that reason isn’t very clear at first. My experience of having an ectopic pregnancy has given me the chance to share my story with others and help remove a stigma that many women feel over something that is very mainstream and has nothing to do with who we are as individuals. I am also aware that my story had a happy ending, some don’t, and many women have a difficult and painful road to motherhood that is not always ideal or successful.
I do not take that for granted and I am thankful to God, each and everyday, for my two greatest gifts because there is no greater joy in my life than my children. 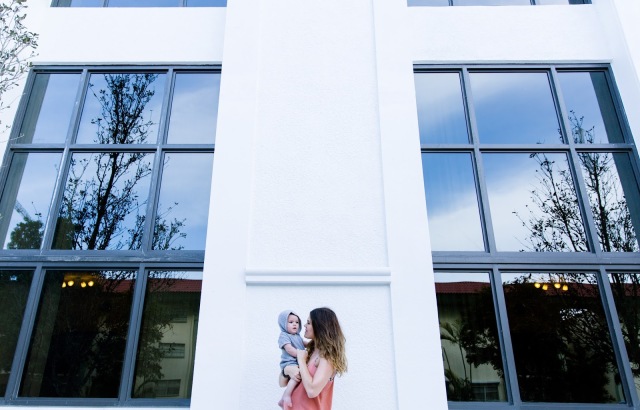 A special thank you to photographer, Yesica Flores, of Simply Lively (www.simplylively.com)  for capturing these beautiful images of me and my little boy. I don’t think she had any idea that her photos would be part of such a touching, and emotional tapestry of womanhood and motherhood! Thank you for being part of my story. 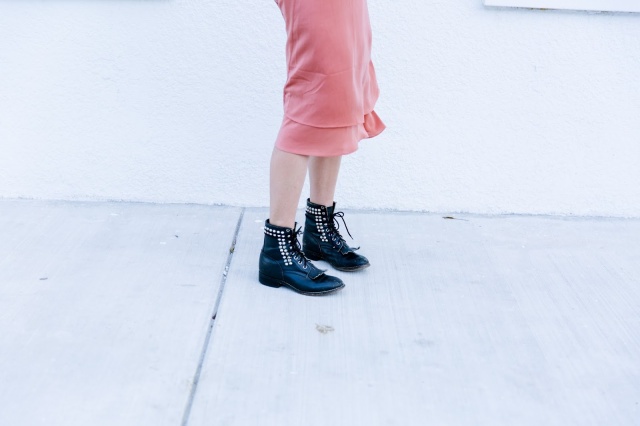 View all posts by kathybuccio